Yamaha Niken – what the hell?

When Yamaha introduced the new 3-wheeled Niken, like many riders I was perplexed. What the Hell were they thinking?

Taking a very good bike as the base – the Tracer 900 – they grafted on a complex front suspension system and two front wheels. Yes, they turned a bike into 3/4 of a car. Why and what would it be like to ride?

I’ve read all the road test reports, produced by professional motorcycle testers, all of whom raved about the front-end but were equally confused about what the Niken was trying to be. When Yamaha launched the GT version, with a  larger screen and panniers to turn the Niken into a tourer, the penny dropped. Here was a revolutionary new type of touring motorcycle, one that had oodles of front-end grip.

I’ve been hankering after a test-ride ever since the launch and today I finally got chance to try one myself, at the Robinsons of Rochdale Open Day. Robinsons was our nominated dealership when were were running the learner training school in Stockport and are a great bunch of guys, so when I turned up they dragged the Niken out from the showroom (no easy task as it’s rather wide at the front and you can’t see where the front wheels are when pushing it!) and made it ready for me to ride.

When you start riding, the Niken feels very heavy around the centre of its steering, as though it’s made of lead. But this weight doesn’t translate into heavy steering – which is odd at first – the bike steers just like a normal bike. But with a more reassuring, planted, feel to the front end. As a result of the heavy feeling to the bike when travelling straight, I expected it to be heavy when turning, but it wasn’t. The steering is exactly the same as it is on any other modern bike, a slight push of the ‘bars, or even a shift of hips, has it dropping into the turn. It’s at this point the front end plays its Ace card, providing the sensation of it being pulled into the road surface, the weight that was evident before becoming a feeling of solidity and a reassurance that it simply will not lose grip. It’s very impressive.

The feeling from the front end is such that it encourages the rider to push that little bit harder into the turns, and each increase in speed and turning is rewarded with even more feel. Each bend becomes a test of nerve – “How much can this take?” The answer is “more than I’m prepared to risk it!”

Around slow, tight turns the front end provides such a strong feeling that the bike won’t lose grip or fall over, that even a novice rider would have no difficulty negotiating them. On my test-ride there’s a tight, 160-degree, uphill, off camber left-turn; I expected the Niken to be a challenge due to its size, but in fact I could have easily turned it much tighter.

The rest of the bike it the same as the Tracer 900 – a willing engine, great gearbox with quickshifter on up-change (not down), good ergonomics, effective screen, etc. The extra weight dulls the acceleration a little, but not enough to prevent it from being fun. A very competent and fun bike.

The Niken is a very impressive machine. It rides very much like a normal bike, but with a feeling of solidity and front-end grip that far exceeds a normal bike.

It’s a great tourer and is ideal for riders lacking in confidence.

If the front-end could be locked in position when stationary (as it can on the Peugeot MP3 3-wheeled scooter) then it would be perfect for riders with disabilities.

I won’t be changing from my GS anytime soon, as whilst it’s an interesting bike, it doesn’t really suit my type of riding, and I’m concerned about the long-term reliability of such a complex front-end.

That said, go try one. You will be pleasantly surprised, and it may impress you enough to buy one! 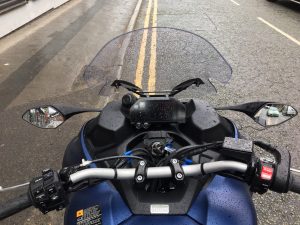 The HUGE front-end of the Niken as seen from the saddle. 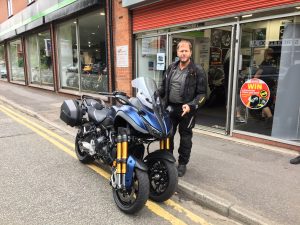 About to start my test ride

No Events are found.